No one ever told me that when you receive a prophetic word, you can expect a bit of tribulation to follow that. Not because God is a tease, but because when someone breathes life into you, you can guarantee that the enemy will do everything he can to keep it from coming to pass.

Joseph in the Old Testament had a big prophetic calling of this life. He had some impressive visions about what his future would look like. Did he step right into alignment with those visions the very next day? No, his brothers eventually threw him in a well and left him to die before he came into his prophetic moment. So there’s that.

So the prophetic word I received on Sunday was mind blowing to say the least. I wrote down as much of it as I could remember, and I was waiting with anticipation for the chance to get an audio copy of the sermon so I could transcribe it into my journal as well. Unfortunately, the next five days were absolutely awful. Not because anything particularly bad happened, but I found myself constantly getting upset and irritated over the smallest things. Someone cut me off on the highway. I’d lose it. Stuck with the slow cashier at checkout. Super frustrated. People at work being jerks. Annoyed. No money in my bank account because work hasn’t paid me yet. GAHHHHH!!!! Little things like that just kept piling on every single day. It was all I could do not to pull my hair out. Thankfully I  used a lot of my time calling my mom and venting and she did a great job of helping me realize what was happening. In the end I kept my cool, but I know for a fact that was a week where  the enemy was trying to bait me in with every little thing he could.

I was doing everything I could to hold on to the prophetic word I received. I was grateful for it. I knew it wouldn’t happen overnight, but I was looking forward to the day when I could look back and say that that word came to pass. In the meantime I had something else to focus on as well.

Remember that comedy showcase I did right before I left for Pennsylvania? Well the guy who approached me after the showcase had invited me to perform at a competition back in Ohio and there would be a cash prize given to the top three contestants. The whole week before the competition I was prepping and writing new material. Instead of 5 minutes, I now needed 7 minutes of stage time performance. I did a little snooping and I looked up all the names of the other contestants I would be competing against. Some of these guys had Youtube videos of their past performances, and they had 20,000+ views. “Holy smokes” I thought, why did I agree to this!?!?! Whatever, it was an opportunity to perform and sometimes you just gotta say yes. So I spent as much time as I could that week not screaming at slow drivers and instead rehearsing my material.

Well guess what? God shows up again. Now I drove my van from Ohio to Pennsylvania, and it’s a 6 hour trip. At some point during the last hour though there is a giant mountain that you have to drive up and down three different summits. It’s kinda big, kinda scary, and anytime you drive a vehicle older than you are, you never know if you’re gonna make it. Remember The Little Engine That Could? That’s pretty much what it feels like to drive up these mountains in a 27 year old van. It’s scary and stressful. I was not in a hurry to drive it back to Ohio for this competition, so I was planning on renting a car for the weekend. As I was talking over my plan with Jeremy, he chimes in “Hey man, I’m going to a conference this weekend for work and we’re taking the girlfriends car. Why don’t you just take my Jeep?” Shutup! For real!!!!????? Jeremy for the win again. Have I told you guys how awesome this dude is? I’ve only been back in town for two weeks and he lets me take his car on a road trip. Thank you Jesus, boy am I blessed.

So I finally make it to Friday night and I pack my bags for the weekend road trip home. I sort of have my 7 minutes of comedy memorized, but I spend the next six hour drive working on it. If there is anything I’m good at, it’s memorizing a monologue, and that’s basically what a stand up routine is. Saturday night comes fast. I snap a few selfies with my girlfriend and we head out with mom and dad for the Garretsville Comedy Showdown. Safe to say, I’m a nervous wreck. This event wasn’t huge, there were only ten comedians or so competing. But I was definitely one of the rookies in the room. After two hours and  ten trips to the bathroom, it was finally my turn to go up. If there is one thing I learned while going to school for theater, it’s that stage presence is key. The biggest thing lacking in a lot of these comedians performances was stage presence. And if I was gonna do my best, then I had to get in the zone. You can watch the performance here. You can see me psyching myself up right before I go onstage. My girlfriend was filming and she managed to capture a few seconds of me pacing without me realizing it. The difference in how i felt before going up on stage and afterwards was very drastic. I went from nervous wreck to ball of joy , but I’m happy to report, it was a good set for me. Good enough in fact, that I won 2nd place and $100.

I was over the moon. One of the greatest feelings was knowing that I went up against some solid veteran comedians and I was able to pull off 2nd place. To me, that was gold. As Saturday came to a close, I spent some more time with my girlfriend and prepared to head back to Pennsylvania on Sunday. All in all, it was a good weekend. I probably spent that $100 in gas and tolls traveling back and forth for it all, but coming off that stage and conquering my fears and hearing people laugh at material I wrote was well worth it.

So my awful week was topped off by a great performance, and now it was time to get back into work mode. 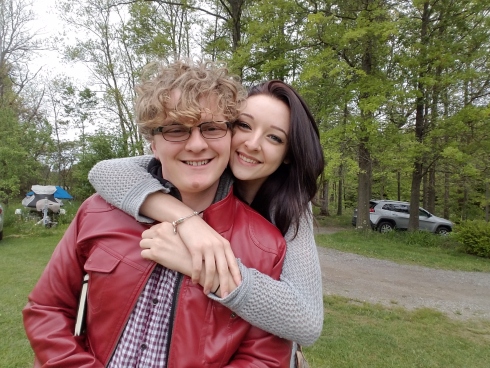